A cost function is a value that we want to minimize. In machine learning, we want to minimize the sum of squared errors (MSE) between the outputs produced by our model and the actual data itself. Thus, machine learning is about finding and fitting a model that produces output values (\(Y_{i}\)) that are as close as possible to the actual data (\(\hat{Y_{i}}\)) as shown below:

With some mathematical adjustments we obtain the following where the data points output by the model is given by \(h_\theta(x^{(i)}\) and the actual data points are \(y^{(i)}\). Below is the mathematical equation often shown in machine learning courses. 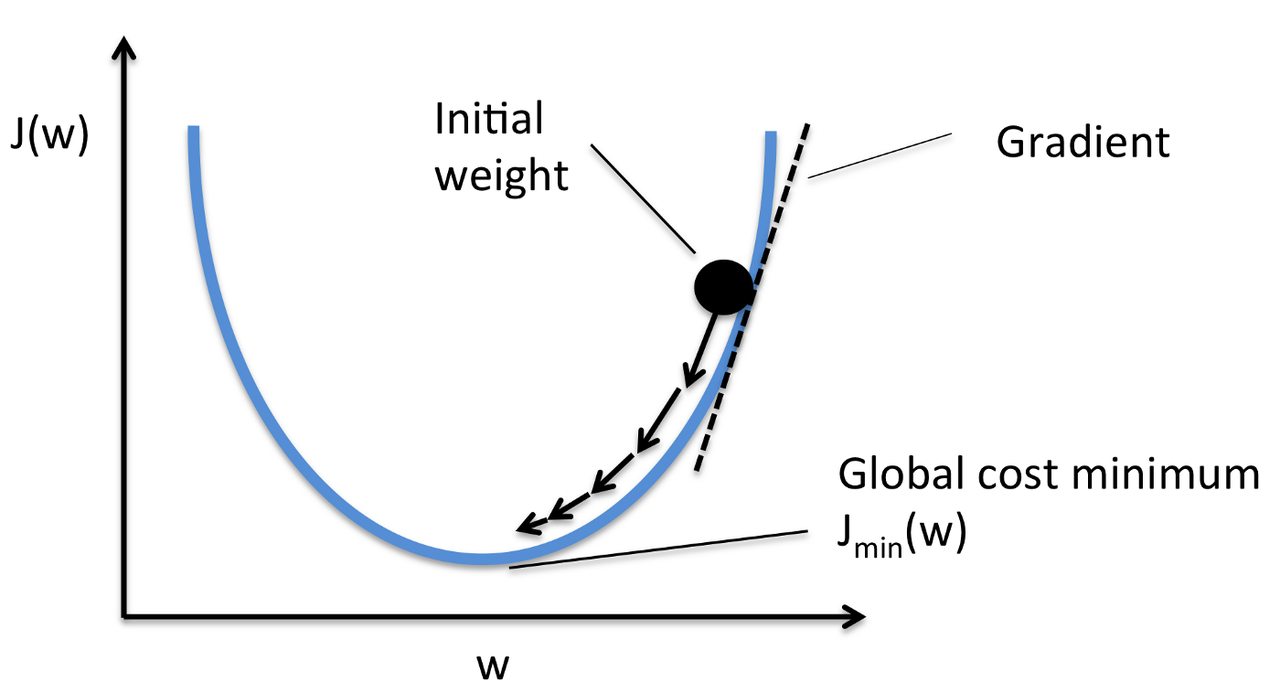 \(\alpha\) is the learning rate. It indicates how quickly we move to the minimum and if it is too large we can overshoot. Having a very small learning rate mean that the model might converge too slowly.

Intutively, if the cost is a function of \(K\) variables, then the gradient is the length-\(K\) vector that defines the direction that the cost is increasing most rapidly (i.e., \(\frac{\partial J(\Theta_0,\Theta_1)}{\partial \Theta_{i}}\)). With gradient descent, you follow the negative of the gradient to the point where the cost is a minimum. Thus, the set of parameters (\(\Theta\)) is updated in an iterative manner to minimize the cost function.

Most machine learning models are using stochastic gradient descent because it is a faster implementation. SGD uses only one or a subset of the training sample from the training dataset to perform an update for the parameters in a particular iteration. It is called stochastic as samples are selected randomly,

SGD converges faster than GD, but the cost function may not be as well minimized as GD. However, the approximation obtained for model parameters is close enough to the optimal values given it is a much quicker implementation. SGD is the de facto training algorithm for artificial neural networks.

Previously, when we optimize for a cost function, the function remains static (\(F\)) and the parameters (\(P\)) are updated to minimize the cost function as shown below:

In previous implementations, SGD or GD is ued to train a single complex model. Gradient boosting finds the best function \(F\) by combining many simple functions together (i.e., an ensemble of simple models).